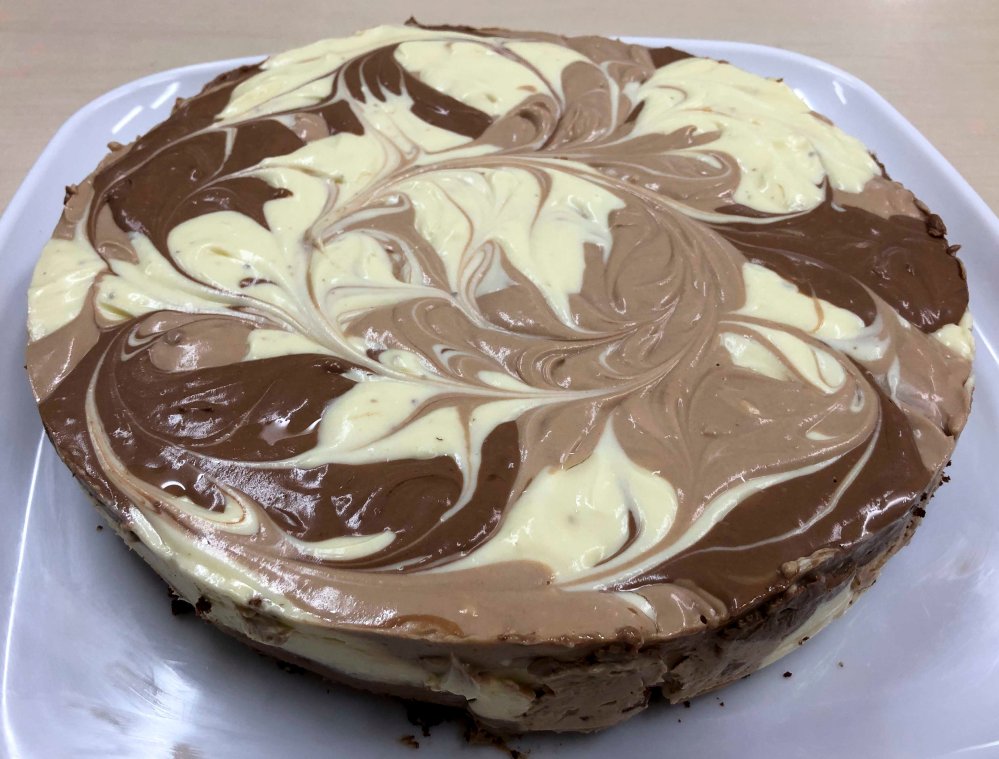 RECIPE: Someone at work was leaving and loved all things chocolate. I had some cream cheese in the fridge, but as it turned out I needed more! Anyway, this recipe caught my eye. I liked this recipe because it had layers of dark, milk and white chocolate cheesecake, and I liked the marble finish instead of layers because it meant you saw all the colours even when it was in the tin. I didn’t change the recipe.

PREPARATION: Use a food processor for the biscuit crust, it makes creating the crumb very easy. It’s a nice touch to add the hazelnut meal, don’t leave it out. Once the cream cheese was softened and my gelatine dissolved, I kept the mixer going while I drizzled in the gelatine to avoid any lumps. I was able to set aside the cheese mix and whipped cream while I prepared the chocolate. I melted the chocolate in the microwave in three separate bowls, not quite melting it then stirring it until the heat of the melted chocolate melted the remaining chunks. I did the milk and white chocolate bowls first but was too late by the time I got to the dark bowl! It had set again while waiting, so I had to scrape off the cheesecake and warm up the chocolate again. Fortunately I was able to get off most of the cheesecake mix. You almost need six bowls so you can split the cheesecake mix into thirds and then prepare your three chocolates. It was all okay in the end. Spooning the mixture into the tin gave a great effect for little effort. I used a skewer to do five circle swirls then swirled into a circle in the middle.

IMPRESSION: I was expecting this to be rich, but it had a light chocolate taste and the cheesecake flavour was still distinct. I really liked it because it wasn’t too rich or too sweet, just right. Lots of good feedback from all my tasters, so I think it was a hit.

Combine biscuit crumbs, hazelnut meal, butter and chocolate and press into the base of a greased 24cm (9″) springform tin; chill. Beat cream cheese and sugar using an electric mixer until smooth. Add the gelatine mixture and beat until well combined. Divide mixture evenly into 3 bowls. Add a quantity of melted chocolate to each bowl and mix until smooth. Fold through a third of the whipped cream into each mixture. Spoon mixture into prepared base, alternating between the three mixtures until all has been used. Lightly swirl mixtures with a skewer and shake to smooth over. Refrigerate 3 hours or overnight until set. Serve with raspberry coulis.